Having properly working and operating smoke detectors in your home is so important as they keep not only your home safe but your family safe too.

That’s why you need to have your smoke detector checked and tested frequently, and you should change the battery once a year to ensure that it is always working to the best of its ability! 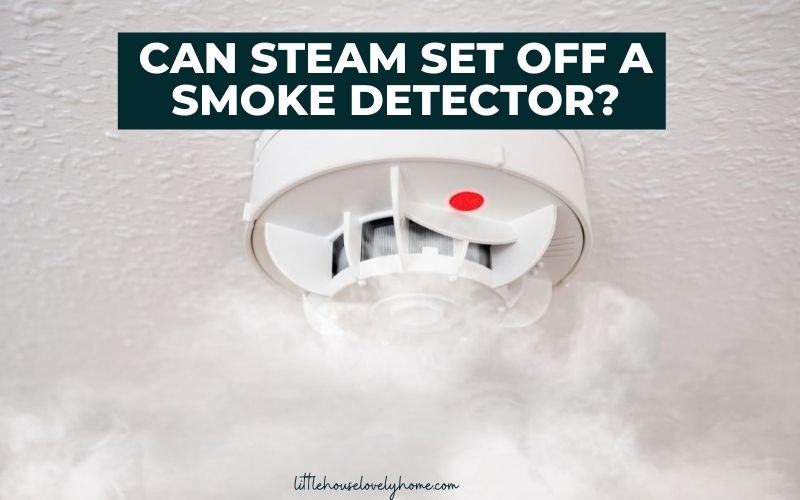 However, smoke detectors might not always work properly, and they can sometimes report false positives. This just means that they go off when there is not actually any smoke nearby.

It may actually surprise you that this most commonly happens when there is a lot of humidity in the air around the smoke detector, which can cause it to go off.

This guide can help you understand why this happens, and whether steam can set off a smoke detector. To find out, let’s take a look at how smoke detectors work.

How do smoke detectors work?

Once smoke particles enter the chamber of the smoke detectors, the particles will scatter and disrupt the beam, which will cause it to redirect towards a photocell, which triggers the alarm, and causes it to go off.

These smoke detectors have a small amount of radioactive material between two electrically charged plates, which will ionize the air and make a current between the plates.

When smoke enters the chamber of the smoke detector, it will disrupt this flow of ions, and will reduce the flow, which triggers and activates the smoke alarm.

What this means is that a smoke detector does not actually always detect smoke, as dust, dirt and debris can disrupt the alarm, or get lodged in the internal chamber, which will cause the alarm to think that it is smoke, and it will go off. So, can steam affect a smoke detector too?

Can steam set off a smoke detector?

The short answer to this question is yes, steam can set off a smoke detector. Steam is actually one of the most common causes of false alarms in most homes.

This is largely due to the fact that the particles of steam behave in a very similar manner to smoke particles, which makes the detector think that smoke is rising in the room, and it will trigger the alarm.

In addition to this, there have been studies that show that the photoelectric type of smoke detectors are more prone and sensitive to steam than ionization smoke detectors.

This is due to the fact that the light beam inside the photoelectric detectors can bounce off steam particles in the same way that it does with smoke particles.

To demonstrate this, if you boil a kettle, or use the shower, and you can physically see the steam with your own eyes, then it is highly likely that the light source in the photoelectric detector will see it too.

This does not mean that ionization detectors do not also go off when there is an abundance of steam in the room.

These detectors can also provide false positives due to steam particles, as they also disrupt the flow of the ions, causing the alarm to trigger.

However, it is not just steam that can have this effect on smoke detectors. Areas with high humidity can also be prone to false alarms.

Many smoke detector manufacturers state that humidity levels of 85% or more can trigger the alarms, so if you live in a very humid location, you may experience more false alarms than others.

Can kettle steam set off a smoke alarm?

Yes, kettle steam can set off a smoke alarm because the steam can enter the alarm.

In addition to this, vapor, smoke and steam that occurs in the kitchen whilst you are cooking food or making drinks can also trigger the alarm as the vapor and steam particles can enter the device and disrupt the mechanism, which will cause the alarm to go off.

This is why it is advisable not to install smoke alarms or smoke detectors very close to kitchen appliances or kettles, they will trigger when they are in use.

It is recommended that smoke detectors are fitted at least 10 feet away from cooking appliances to minimize this issue!

So, if the smoke detector goes off every single time you cook…maybe it’s not actually your cooking, but the steam that is reacting with the detector!

Can shower steam set off a smoke alarm?

Yes, smoke alarms and smoke detectors can be set off just with the steam from the shower or bathroom.

This is why they should be installed away from bathrooms as the steam from baths, showers and hot water can cause them to go off very easily, and can trigger false alarms.

To summarize, any particles that can float into your smoke detector can easily set it off. Things such as vapor, steam, dust, smoke and other dirt and debris can set off the smoke detector.

This is often why smoke detectors will go off when you are cooking due to the large amounts of steam in the room and near the detector.

As a result, it is best to install them away from kitchens and bathrooms, so the steam from cooking appliances or a hot shower does not cause lots of false alarms.