Ink is one of the most underrated products that we tend to use throughout our lives.

Whether getting a new tattoo, printing off assignments in color, or replenishing the cartridge of your favorite pen – ink is a common substance that is used on many occasions.

But should we be concerned about the ink we have at home? Is it much of a safety hazard? Will it burn easily? 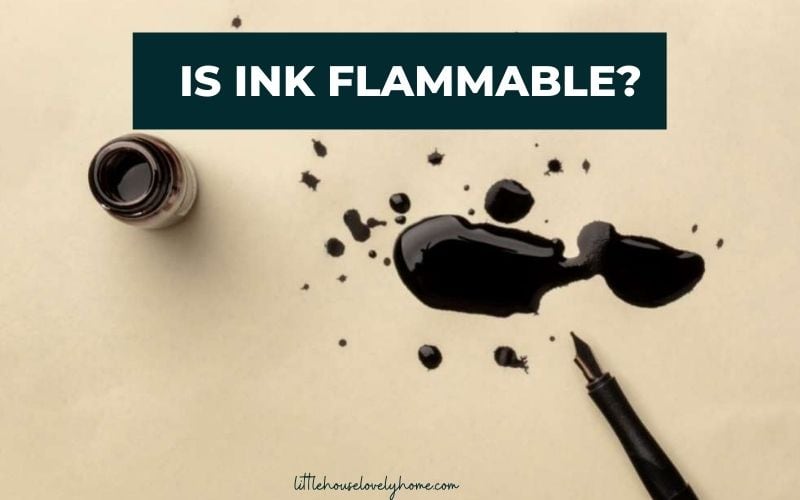 The answer to these questions is yes. Whilst some types of ink are extremely flammable regardless of how much you use, and others less so, it still poses a great risk to our general safety.

So if you want to find out more about the properties of ink, and whether it is flammable, this guide will highlight some of the most prominent issues for your consideration!

What Does Ink Do?

Ink provides a large majority of the color we see on paper in our modern world. It has many uses, ranging from being part of an artist’s tool belt to improving calligraphy and transferring images onto different surfaces.

This is then transferred, printed or drawn onto the relevant surface – which could be anything from paper, fabric or even human skin if it is a tattoo design being carried out.

Finally, the solvent then helps to officially dry out the ink, which creates a lasting imprint of the dye on its intended material. This process is what we usually associate with the idea of ‘ink.’

What Are The Different Types Of Ink?

There are two distinctive types of ink. There are those with a water-base, and those with more of a chemical base.

These include ethyl acetate, as seen in nail polish remover, alcohols, and mineral oil.

It is important to note that ink with a higher chemical concentration, also known as a hydrocarbon, will be more likely to ignite than that of water-based inks.

This is because hydrocarbons are compounds that only contain carbon and hydrogen, two elements that are key igniters when merged together.

In short, this means that this variation of ink is far more likely to burn when exposed to a relevant environment. A large majority of hydrocarbons are flammable and are increasingly susceptible to fire.

So, depending on the amount used in the ink, there could be many more instances for ink to ignite.

When water is used as the main element of a solvent, however, it will become much less flammable. That is, unless further potent properties are added to the mixture. The main downside to this type of ink is that it is much less common than other types.

In general, many inks will only be flammable while wet, as the solvent may leave the ink as it dries. But this is not always true.

Other factors including a health and safety evaluation must be taken into consideration when using any form of ink so that additional danger levels are limited as much as possible.

Remember that if you cannot see a full list of elements that have been used to create the ink, and water is not mentioned at all, it is a safe bet to assume that it will be flammable!

It is important to remember that by themselves, liquids and solids are not capable of burning.

Instead, they release vapors into the atmosphere which, depending on the temperature of the environment, are easily ignited.

The short answer, however, is yes – ink is able to burn. This is down to the simple fact that each type of ink contains different compositional elements that have separate reactions in different environments.

Flammable and combustible liquids are present in many environments. Specifically, cleaning products, solvents, and paint all have the potential to be flammable or combustible. It is therefore vital to be aware of the safety hazards they could cause.

The terms flammable and combustible are used frequently and interchangeably, but they do not have exactly the same meaning.

Therefore, the main difference between these two states has a lot to do with the temperature of the liquid itself.

A flammable liquid is one that has a flashpoint less than 100 °F.

This means that this is the lowest temperature at which a liquid will have to be to produce enough vapor to ignite. Flammable liquids are quick to ignite and burn very fast as a result.

These fires are dangerous and could become life-threatening as they give off an increased amount of heat, and often expel clouds of thick, toxic smoke into the air which greatly increases health risks.

At temperatures above their flashpoint, combustible liquids will also release enough vapor to cause ignition.

These are liquids with an increased flash point of over 100 °F, with diesel and motor oil being the most commonly used elements.

Even though combustible liquid produces ignitable vapors at elevated temperatures, they can be just as serious and harmful as flammable liquids.

With fire safety becoming more of an important factor in our everyday life, it is shocking to discover the dangerous properties of household materials usually thought of as harmless.

Overall, it is safe to say that despite coming in many variations, the ink that we use on a daily basis is very flammable when surrounded by certain factors.

Though water-based ink is far less likely to ignite than chemical-based, it does not mean it should be treated without the upmost caution.