You may be aware of all the things in your home that can pose a fire risk, and you’ve probably taken steps to avoid causing an accident like not leaving any exposed flames burning and installing fire alarms around the house.

But with all the fire hazards that are often found within a home, very few people think about what’s in their walls. So is insulation flammable? 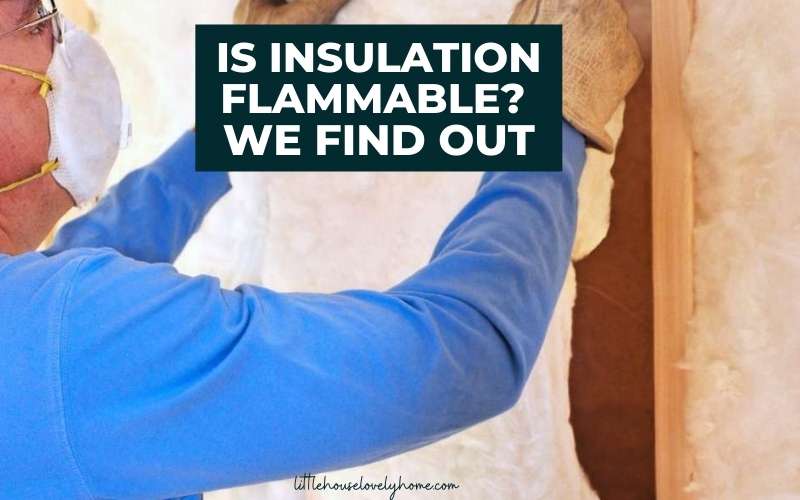 Some form of insulation will appear in the walls of almost every home. It’s used to keep heat in during the winter and helps with energy conservation, which in turn helps you spend less on heating.

Unfortunately due to what insulation is often made from, this stuff can be highly flammable and in some cases could make your whole house go up in smoke in just a few minutes.

You may not know, but there are many types of insulation, and the one you have in your walls will have an impact on how the fire burns and spreads.

Some insulations will be marketed as “fire-resistant”, but this doesn’t mean that they’re actually fireproof.

Insulation is often treated with fire-resistant chemicals that help slow the rate of combustion meaning that the fire spreads slower, though it can’t completely stop it.

Choosing fire-resistant insulation is the safest bet for your home as it allows more time for you to get out of the house, and may also slow the burn enough for fire crews to come put it out.

Let’s take a look at the different types of insulation and how they can burn.

This is the most common type of insulation found in homes due to its low cost and high thermal resistance. It’s made of glass that’s spun into fibers and then combined with plastic polymers.

This makes it the safest insulation to use as it technically cannot catch fire. When fiberglass gets too hot it melts, which can cause a lot of damage to your home, but it won’t catch fire.

This is very unlikely to happen anyways as fiberglass only begins to melt at temperatures above 1,000 degrees Fahrenheit.

The real safety issue of fiberglass comes from the paper backing attached to it. Used as a moisture barrier, this can catch fire in much lower temperatures.

It can burn quickly once it catches and so although it is unlikely to happen if a fire does begin here you’ll need to evacuate quickly. Despite this fiberglass is still the safest insulation to use in your home.

Often used as an alternative to fiberglass, cellulose is made from recycled paper rather than a glass/plastic blend and so is usually used in more eco-friendly households.

Though heavily treated with fire retardant, because it’s made of paper it’s still highly combustible, and once the fire starts it will spread very quickly through your home.

Though some cellulose insulation is marketed as being able to withstand up to 300 degrees before catching fire, it is still considered a fire hazard by the Consumer Product Safety Commission (CPSC), which requires all cellulose manufacturers to warn their customers about this.

This insulation isn’t made with wool at all but rather from recycled iron and steel, or from mineral rock itself.

This is another very safe insulation to use as the material is naturally non-combustible meaning that it is very difficult for a fire to start and spread.

It also has a very high melting temperature so it’s highly unlikely to do this. This is a great alternative if you don’t want to use fiberglass insulation in your home.

One of the more uncommon forms of insulation, it’s made from a foil-like material that helps radiate heat away from your home.

So rather than keeping the heat in it actually pushes it out, keeping your home cool. This type of insulation is more likely to be found in the warm southern states rather than up north.

Though like all insulation it’s usually marketed as being fire resistant, as it is usually made from aluminum foil sheets it can catch fire even though it’s unlikely. Once lit though the fire can spread very quickly.

Spray foam insulation is usually made from polyurethane and has the consistency of shaving foam when first applied but then it expands to fill the space available.

This makes it a great form of insulation to use when filling up small cracks or holes. In general, it’s the easiest insulation to apply as you just spay it into the space and the foam does the rest.

Like all forms of insulation, this one can still catch fire, though most spay foams can slow down the spread of fire so you’ll have more time to get out and call for help. This makes it one of the safest insulations out there.

Other Things To Know

Fire class ratings are a way of classifying materials by how flammable they are and how much smoke they produce when they burn. Most modern buildings now come with a fire rating classification, and this is something that should be considered if you’re thinking about re-insulating your home.

Almost all insulation will fall into Class A as these include materials like textiles and paper. These types of fires can spread quickly though they are the easiest to extinguish if they’re caught fast enough.

All insulation comes with an R-Value rating, which is the measurement of their thermal resistance or resistance to conducted heat flow. In simple terms the higher the R-Value the better the insulation is at keeping the heat in.