Oxygen – the very stuff of life. We breathe it in every day, but are there any dangers to this life-giving substance? We know that oxygen certainly feeds fires and we all know that CO2 does help to extinguish fires, but is oxygen flammable?

The short answer is no. Oxygen itself is not capable of catching fire, it is more the fuel for the initial ignition. The oxygen is what makes the fire burn at a much lower temperature, making a fire burn hotter and faster. You should see oxygen rather as the substance that supports the combustion process rather than being a catalyst for it. 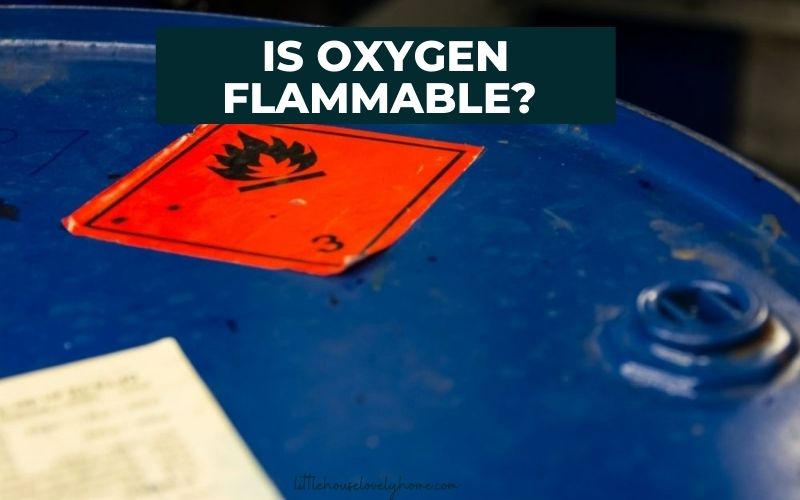 The catalyst for the fire is usually the ignition itself, followed by whatever materials there are around, including wood, plastic, human hair and even human flesh if the temperature is hot enough.

So is there any instance where oxygen does catch fire? What chemicals should you be wary of when igniting something?

Are oxygen tanks dangerous to have around naked flames? Is it possible to smoke safely when you are on oxygen without causing a blazing fire?

Well, if you want the answers to these questions and a whole lot more, then we would recommend that you read the remainder of this article.

We’ll cover everything oxygen and fire related so that you have everything that you need to know to avoid causing a fire now or at any time in the future.

The Big Question: Can You Set Fire To Oxygen?

Despite many rumors that might be swirling around regarding fire and how quickly one can start, we’d like to dispel one notion now and that is: oxygen simply cannot be set on fire.

It is rather the fuel for fire, not the source of the combustible material itself.

If you have ever filled water with air, then it will usually take the form of bubbles. If you have ever tried to set fire to bubbles, then you’ll know how disappointing the whole affair can be. This is because oxygen is not the source of fire.

To set fire to something, you usually need a fuel source. Fires will not just happen out of thin air (regardless of how many articles on spontaneous combustion that you might have read!) You’ll usually need wood, tinder, wool, hair or some other flammable material to sustain a fire.

There are plenty of places with oxygen but without a combustible fuel, it simply will not catch fire.

How Does Oxygen Combust?

To start a fire, you’ll need 3 things in what is called the ‘fire triangle’. These three are: fuel, heat and oxygen.

The heat is usually the thing that sustains the fire, as well as the initial spark. You’ll also need the temperature of the room to be at a certain level, although you can start fires in colder temperatures.

Then fuel will be the thing that you are setting fire to. This can either be wood or some other substances, usually, it will be dry enough to sustain the spark and keep the fire going.

If your wood is wet, it will usually be a lot harder to sustain a large fire, so you’ll need to make sure that the environment is completely dry.

Then the final element is the oxygen, although, as we have stated above, this is not the thing that itself catches fire.

This triangle is dependent on all the other elements, so if there is one element of this missing, then the fire simply will not start. This is why oxygen on its own will not catch ablaze.

However, you can inadvertently have all the elements together, which is why it is important not to store any oxygen near something that might catch fire.

For example, if you mix fabric curtains and flames with oxygen, then you can be certain that there will be a hearty blaze.

Can You Smoke Around Oxygen?

If you are having oxygen therapy and are smoking, you won’t have to worry about your oxygen unit exploding. The flame on your cigarette is not that powerful, as there is not really enough fuel to get the fire raging.

The only cause for concern would be if you have lots of combustible materials around.

One reason to not smoke around oxygen is that a cigarette contains a lot of noxious materials that will cause irritation to your respiratory system and reduce the volume of oxygen in the area.

This will be very detrimental to your lungs and might counteract the positive effects of the oxygen tank.

Oxygen Therapy: Is It Dangerous?

No, oxygen therapy is not in itself dangerous because, as we have stated before, oxygen tanks will not explode in the same manner as a carbon dioxide tank would.

The only thing that you might notice if you have a naked flame around oxygen is that the flame itself will increase in size. This will not be overly dangerous unless you add a large amount of combustible material. This is another reason that you should try to reduce the amount of contact between your flame and oxygen.

One reason that you should not have naked flames especially in a hospital setting, is that there is an abundance of material that can catch fire, especially blankets and mattresses. There are also CO2 machines that will combust if you have a naked flame near them.

We hope that our breakdown of oxygen and how it works with flames has given you peace of mind, as you can count on it being relatively harmless.

The only reason a fire will spread more rapidly is if there is a mixture of fuel, oxygen and heat in the vicinity.