Sugar gets a bat rep for its role in our modern lives. It is famous for a wide array of health issues like diabetes, obesity and tooth decay – but could it be far more dangerous?

Today, we’re going to take a sweet look at our dangerous friend for its role with fire. So, buy yourself a candy bar and let’s examine – is sugar flammable?

The History Of Sugar

It’s probably first important to engage with the past life of sugar. For thousands of years, sugar has been enjoyed for its sweet properties.

Originally, the people of New Guinea used to chew the sugar canes. As time progressed, sugar canes were shipped globally.

Eventually, sugar was refined and produced, pretty much as we know granulated sugar now.

Due to a lack of scientific knowledge of the times, it comes as little surprise that people did not understand the chemical makeup of sugar and how it can chemically react and alter with its surroundings.

The Differences In Sugars

There are a variety of different sugars, but we will focus on the most common that we recognize.

Powdered and table sugar are both dangerous. Not just to our health but in terms of their ability to ignite. Sucrose (table sugar) catches fire at around 662 degrees fahrenheit.

However, due to a greater area of surface and a lesser size particle, it can not only become flammable but also has the ability to explode.

To understand why, we need to know what makes sugar. Sugars are by their nature, hydrocarbons which also contain oxygen.

The atomic makeup of sugars and the ingredients of a hydrocarbon make them extremely likely to burn.

For any fire, you require an oxidizer. In this instance, we have oxygen.

Hydrogen is incredibly flammable and has the ability to explode. This makes hydrogen a good fuel source for vehicles and even rockets.

In 2008, Savannah, Georgia experienced a huge explosion in an industrial plant that produced sugar. It killed 13 people and injured 40 more. This was the largest producer of sugar in the States (Imperial Sugar Company.)

Sugar dust particles floating in the air everywhere, flammable materials all around and the potential spark to ignite it all – perfect setting for such a blaze.

It’s possible for the spark to be caused by electrical switches like a light or even a pump for the motor. Either that, or somebody lit a match! Whatever the case, the result is deadly. 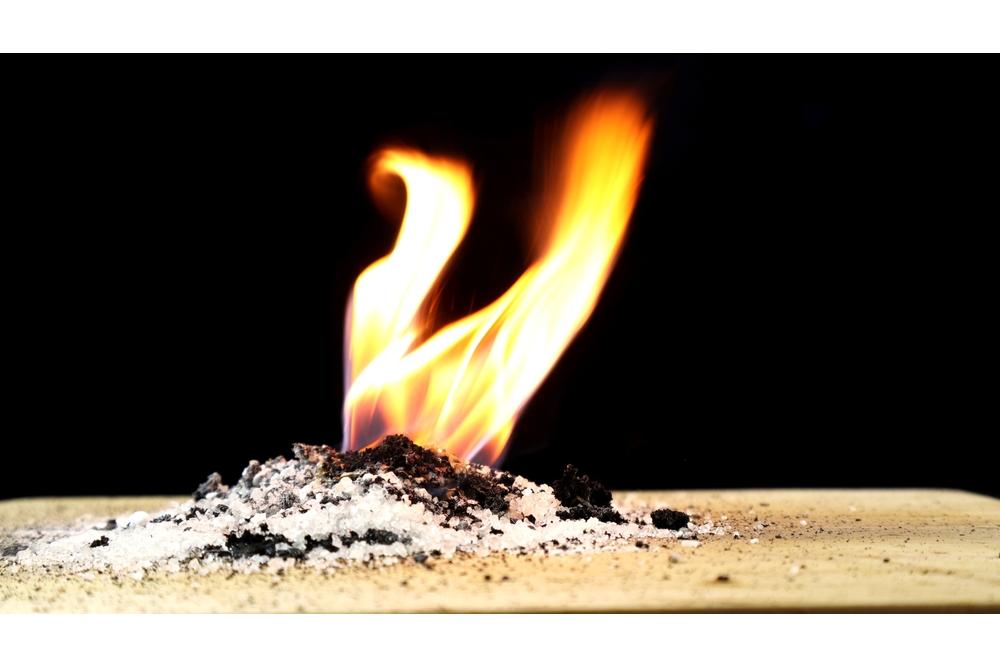 But I’ve Burned Sugar Before?

You’d be right in thinking that you might have made caramel by burning sugar or putting a marshmallow over a campfire.  The reason that marshmallows don’t explode when fire is introduced in its life is due to the sugar within the mallow being unable to react with oxygen.

It is oxygen that is the key for the reaction. Most organic materials have the potential to burn but with things like dust particles, sugar particles or flour particles – a reaction from a spark such as a match can cause a chain reaction of fire/explosions. Scary stuff!

Due to these “lower” temperatures, the sugar caramelizes before it goes on fire. The heat is exiling the water molecules whilst simultaneously the molecules of sugar join together in chains.

You may notice the color of caramel being kind of brown? This is because the sugar has gone through a burning process!

In fact, if you tried to make caramel at a much lower temperature again, you’d end up with charcoaled sugar. Think of a log in your yard or camp that doesn’t actually catch fire but does burn and smoulder.

The higher the temperature, the more dangerous the result. Sucrose begins to decompose and creates a very deadly chemical; hydroxymethylfurfural.

Ignition of this is simple and the impending chain reaction can have the consequences as seen in Savannah. This is because the sugar’s water has completely evaporated and now is totally flammable – becoming the source of fuel for the fire.

Hydroxymethylfurfural has fantastic biofuel potential. In fact, at a smaller level – sugar is used in amateur homemade creations like firecrackers or rockets.

It seems very unlikely that you’ll be in danger at home from your Domino sugar. However, it is important to talk about ways to keep yourself safe.

Let’s talk about home first. Hopefully, you’d have thought about fire prevention before.

A fire extinguisher, easy access to the phone so you can call for the fire department if needed and fire-proofing is the best way to tackle potential blazes. Keep your sugar in a sealable glass jar and try to minimize the spread of the particles in the air.

If you’re pouring sugar and causing a cloud for instance, maybe think about doing that outside or waiting a while before causing a spark (lighting a match, cigarette etc.) Also, ensure you have a working smoke detector!

Nowadays, due to a history of explosions and blazes at sugar and flour mills – most places have taken preventive action to curtail any potential problems that might arise such as having areas sealed off, slowly filling silos and frequent cleaning.

What Should I Know?

You asked if sugar is flammable – the answer is yes. However, the likelihood of you being in imminent danger is low at your home.

If you work in a sugar factory or flour mill, you could be at risk so it is always worth knowing these facts. If you just make sure your home is fire safe – you’ll be fine.