If you like to kick back with a glass of wine now and then, you may have taken the risks that come with drinking into account. But have you thought about whether wine can catch fire?

If you’re a regular wine drinker, you may want to know if wine is flammable or not. 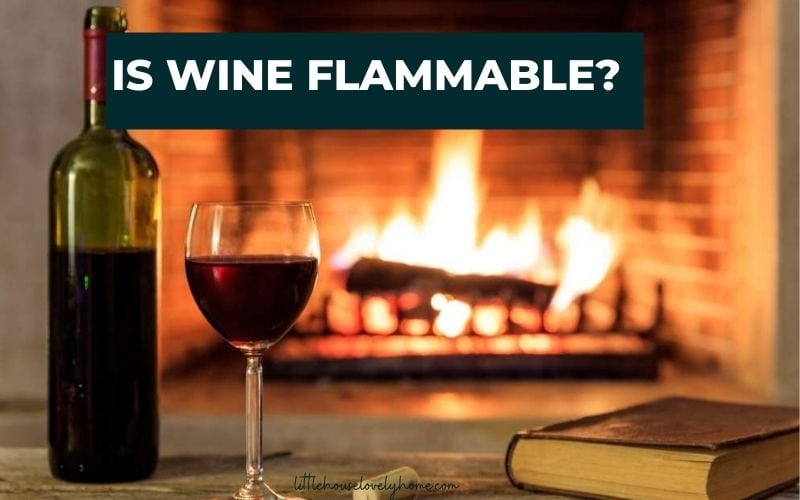 What Is Wine Made Up Of?

More work goes into preparing wine than compared to spirits. Wine is made by fermenting grapes which in turn, produces ethanol (alcohol).

The method also produces other chemicals, like tannins in red wine. These give the wine its bitter flavor, and are also behind the hangover when you drink too much.

Sugar that is used in the process also stays in the wine. Many chemicals are produced during fermentation, which gives wine its overall characteristics.

Unlike spirits, when it comes to flammability, wines won’t catch fire. They don’t contain enough alcohol, only around 12-15% in suitable drinking bottles.

The ingredient most prevalent in wine is water. Unlike alcohol, water doesn’t burn. You’ll have more luck putting a fire out with wine than starting one.

Generally speaking, wine won’t catch fire, as there’s a greater ratio of water to alcohol. The alcohol in wine isn’t in large amounts, so there’s not enough of it to catch fire.

Strictly speaking, it is possible for the ethanol present in wine to catch fire. However, if it did, the flame would die out immediately, and wouldn’t be able to spread.

Because of this, instead of wine, flaming dessert recipes use spirits for the fiery effect. Vodka, whisky, and Grand Marnier all burn easily compared to wine.

Wine is used in desserts, but this is mainly due to the flavor it adds to cuisine. You won’t see chefs using a bottle for flaming desserts.

There is one scenario that you should be aware of. If wine bottles were open and kept in an airless, unventilated room, then the alcohol could evaporate.

Without effective ventilation, the ethanol wouldn’t diffuse. This vapor is flammable, which could catch fire and cause harm.

This is a scary scenario, but it is very unlikely to occur. Even when catering to a large group, bottles are opened one at a time instead of all at once.

If you are worried, remember to store your wine in a well-ventilated area. If you don’t normally finish a bottle, you can buy wine stoppers that act as a cork.

This stops the alcohol from evaporating, which keeps your wine fresher for longer too.

Is Wine Flammable During Fermentation?

You now know that wine isn’t flammable. But could wine catch fire when it’s being made?

If you like to ferment your wine at home, you can rest easy. There’s little risk of wine catching fire when it’s being made.

The fermentation process also releases carbon dioxide. This is used in fire extinguishers as it can smother blazes easily. 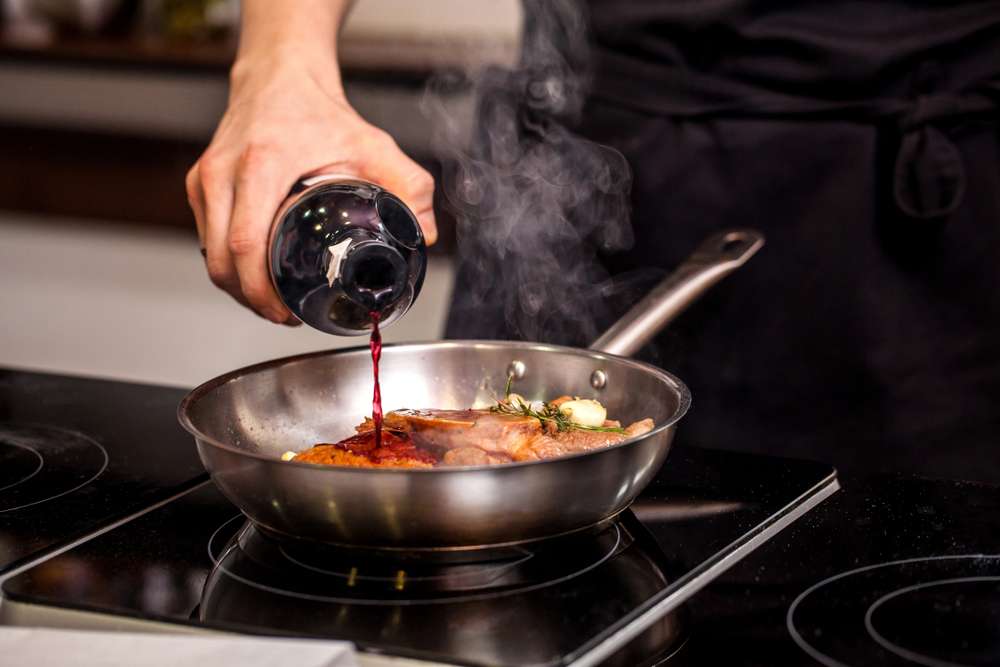 Cooking wine acts just like normal wine. It won’t catch fire as it contains a low amount of alcohol, with most bottles being around 16%.

It is completely safe to cook with wine, and it can add a nice taste to your food. White wine can add a tartness to seafood or chicken. Red wine can make gravy or pasta sauce richer, adding a velvety texture.

Despite this, there are some instances in which you shouldn’t cook with wine. These aren’t fire safety concerns, but you should be aware of these.

Drinking alcohol isn’t for everyone. If you’re having guests over, find out what their dietary needs are. If you’re making dinner for people that don’t drink, cooking wine shouldn’t be used at all.

There is a myth that suggests when during cooking, heat removes all of the alcohol. This isn’t always the case.

Most people underestimate the time ethanol needs to be cooked off completely. It won’t get you drunk, but in most cases, there will be trace amounts of alcohol left in your dish.

What Is The Flashpoint Of Alcohol?

Pure ethanol is flammable at lower temperatures. The flashpoint does need a flame or spark to catch fire, but the risk is still there. If you were keeping pure alcohol for any reason, you need to store it carefully.

Ethanol can ignite without a spark, but only at extreme temperatures, around 689°F (365 degrees Celsius). Pure ethanol is very flammable, but don’t worry, it won’t burn up when you’re not looking.

Most people don’t come into contact with pure alcohol either, so unless you’re a chemist, you can rest easy.

What Alcohol Percentage Is Considered Flammable?

Some drinks are known as flammable liquids. In most cases, if the alcohol by volume (ABV) in the drink is more than 40-50%, (80% to 100% Alcohol Proof), then it is considered flammable.

Can You Drink Flaming Alcohol?

Flaming Shots and Flaming Desserts have become popular with bartenders and chefs. Flaming alcohol shows off their skills and can add a caramel-like flavor to the dish or drink.

Flaming shots should be made with proper care and supervision, so you can drink these safely. However, you should never drink the shot while it’s on fire.

Before drinking, you need to put the flame out. Most bartenders will be able to do that for you, but you can use a little water to do it yourself.

Which Alcohol Is The Most Flammable?

The more Alcohol Proof a drink has, the easier it will burn. To be considered as flammable, alcoholic beverages need to be higher than 80 Alcohol Proof.

The most flammable alcoholic drink that is legal and drunk openly is SPIRYTUS Vodka. It contains 192 Alcohol Proof (96% ABV). Anything above that is Pure Ethanol, which shouldn’t be drunk as it can cause alcohol poisoning.

The more ethanol that a drink contains, the more likely it is to burn. Flaming shots and desserts used with spirits are best left to the professionals, but it’s perfectly safe to use wine to cook with.