If a fire breaks out, it’s probably your natural reaction to reach for the nearest water source and toss it over the fire.

While this often goes smoothly in the movies, it’s not as straightforward in reality.

This is because there are different types of fire, divided into classes (A, B, C, D and K), and they all react differently when they come into contact with water.

So, it’s important to know about the different types of fire and which ones can be put out safely with water.

Explainer: What Type of Fire Can Be Put Out Safely with Water?

Class A fires can be put out safely with water. These are the most common types of fires, as they involve the burning of ordinary materials. This can be anything found in the home, such as wood, clothing, paper, and plastic.

Many Class A fires are started accidentally, such as when a candle is knocked over or when lightning strikes a tree.

Class A flames are the simplest to extinguish, and they can be done using either water or foam. The heat supply to the fire is taken away, and the fire is smothered.

However, it’s important to remember that smoke causes far more harm to humans than fire- and while a fire is being extinguished with water, it usually gives off a lot of smoke, as well as hot debris that can damage your eyes and skin.

So you should only try to extinguish a fire yourself if you feel confident in doing so, especially if you’re in an enclosed space. Doing this can lead to smoke inhalation, which can be deadly.

If your efforts to extinguish a class A fire with water aren’t working fast, don’t hesitate to move to a safe location and call the emergency services.

Which fires can’t be extinguished with water? 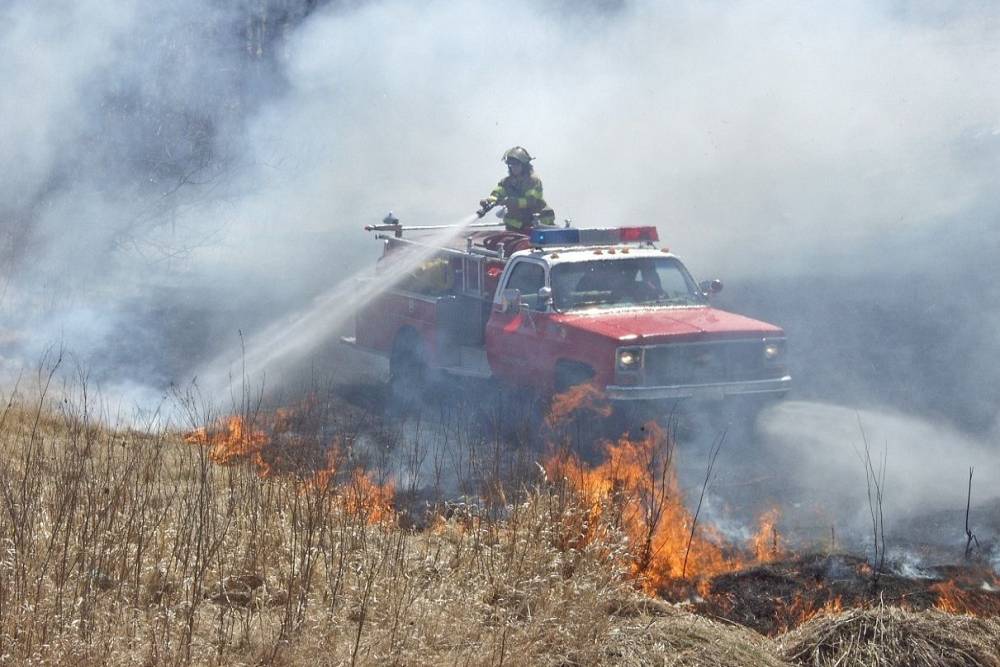 Pretty much every other type of fire poses a risk when it comes into contact with water. Some can actually be accelerated by water, and others can explode!

This is why you should only attempt to put out a class A fire with water.

Here’s what happens when you put water on these other types of fire:

Class B fires are made up of flammable liquids, most commonly gasoline or alcohol. They’re often the result of oil spills in garages or similarly at service stations.

This class of fire doesn’t involve any solid materials and it also doesn’t include cooking fires.

If you put water on a class B fire, you could end up making it a lot worse. As oils and water don’t mix, and can’t mix, it results in a spray.

This spray is made up of boiling hot liquid and results in a lot of steam too. Putting water on a class B fire can spread the fire further and it can get out of control at lightning speed.

So, if you ever encounter a class B fire, remember not to use water. Instead, you should opt for a fire extinguisher that’s made specifically for tackling class B fires.

These will usually contain a special foam, but can sometimes come in powder form, or carbon dioxide gas. It works by suffocating the fire via cutting off its oxygen supply.

Class C fires are those that involve electricity and usually occur in buildings with outdated or faulty wiring. Alternatively, they can be caused by a faulty electrical appliance, when they suddenly burst into flames.

If you put water on a class C fire, you’ll probably end up electrocuting yourself. This is because the droplets of water will form pools on the ground, eventually reaching you and creating a circuit.

Don’t be tempted to try to put out a class C with your foam extinguisher though, you’ll need a specific Class C extinguisher.

This is because like water, foam can create a circuit and electrocute you. Class C fire extinguishers contain powder, or sometimes carbon dioxide.

If you ever encounter a class C fire, the most important thing to do is to turn off the source of electricity as soon as possible. If you can’t safely get to the specific appliance or plug socket, head straight to your fuse box and switch the circuit breaker.

Not only does it help prevent the fire from spreading further, but it also helps lessen the chances of you being electrocuted.

If all of these different rules regarding extinguishers are confusing you, you’ll be glad to know that class ABC extinguishers exist, which are suitable for all three types. We recommend keeping one at home just in case.

Class D fires involve flammable metals that are only used in industrial settings, so you’re unlikely to ever come across one- unless you have a secret stash of magnesium or sodium or sodium at home.

Nonetheless, it may be useful knowing that class D fires should never be extinguished with water, as this can cause an explosion.

Metals burn at extremely high temperatures- think furnace heat. So if you douse it in water, it immediately burns away and evaporates.

This reduces the water to little more than oxygen, which quite literally fuels the fire. To make things worse, there’s some hydrogen too which is notoriously explosive.

The only thing that can successfully extinguish a class D fire is a dry powder class D fire extinguisher. Pretty much anything else you try will result in making the situation worse.

You’ll probably never need to own a class D fire extinguisher, but it’s handy to know.

Class K fires are specially reserved for those involving cooking oils and fats. These heat up to much higher temperatures than average and most often occur in professional kitchens, when a pan has been left on the burner unattended.

Class K fires can sometimes even occur in your own kitchen if you’re not careful, so be sure to give any cooking food your full attention.

If you try to put out a class K fire with water, you’re going to get similar results as you would expect with a class B fire. It’ll spit a lot and create lots of small patches of flaming material, making it much more challenging to tackle.

If you ever encounter a class K fire, you should first try to suffocate it with a lid or fire blanket. This cuts off the oxygen supply, extinguishing the fire.

Alternatively, class K fires can be tackled with wet chemical class K fire extinguishers. These are handy to keep in the kitchen.