Vodka is often a drink that many of us keep in our cupboards, ready to crack it open at the next big event! But, is Vodka flammable, and can it be ignited? That’s what this guide is here to find out!

Vodka is a very versatile drink that can be mixed into various cocktails, mixers or simply served neat with some ice! 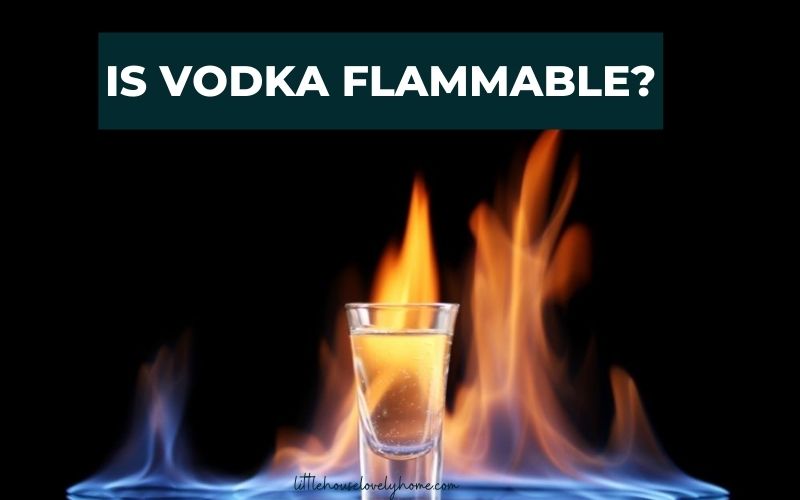 But, is it something that has potential to catch fire, and should we be careful next time we order this alcoholic beverage? Let’s find out!

What exactly is Vodka made from?

Vodka can be made from various ingredients such as potatoes, fruits and grains. This is because the end result of the vodka making process is always the same, it is just ethanol and water.

Ethanol is actually the alcohol that is found in every kind of alcoholic drink, and vodka is simply just a watered down, diluted form of this alcohol. As you already know, alcohol is flammable.

How many times have you seen someone pour alcohol on the floor in a music video or TV show, before igniting it with a match?! So yes, alcohol is flammable, but what about vodka?

Vodka can be flammable as you can light it on fire, however it will not necessarily burn for long.

This is why vodka is often used for bartending, and can be ignited and lit for cocktails or to add flair and entertainment to the bartending process.

When lit, vodka will burn with a very bright, steady and blue flame, which makes it the perfect ingredient and addition for cocktails or burning drinks, as it is really eye-catching and enthralling to look at!

That being said, vodka does not really burn for a long time or very consistently. Most vodkas are about 80 proof or about 40% alcohol, which means that the alcohol level in the drink is not enough to burn consistently or well.

With an 80 proof vodka, you can expect the alcohol in the vodka to catch fire, but the water element in the vodka will quickly extinguish the flame and put it out.

So, what proof alcohol is flammable?

As mentioned above, most Vodkas will be about 80 proof or 40% alcohol, which means that whilst they are flammable, they will not burn for very long at all, and the flame will go out very quickly.

So, what alcohol level will make it highly flammable, and keep it burning for a longer amount of time?

Well, due to the demand for flaming cocktails and drinks, manufacturers do make Vodka with higher percentages of alcohol, which means that they will burn for longer.

These types of Vodkas tend to be about 100 proof, making them much more flammable and much stronger to the taste.

Can I drink flaming vodka?

If you order a beverage made with Vodka, and it is served flaming, then you do not have to worry too much. You can drink it, as long as you do so responsibly and with care. Of course, do not drink the beverage or cocktail whilst it is still flaming.

Most flaming vodka drinks will go out within a few seconds or minutes, so just wait for the flames to die down, or for them to be extinguished.

In addition to waiting for the flames to go out, you will want to exercise some caution when it comes to picking up the glass. For instance, flaming vodka shots can often be served in small shot glasses, which can quickly heat up and become too hot to handle.

Some of the ignited Vodka may have also spilled over the sides, so you should also be careful picking up the glass and drinking it. In the same sense, you should not use a straw either as the plastic could quickly melt and ruin your drink.

Can Vodka be ignited?

Yes, vodka can be ignited, and most vodkas at 80 proof will catch fire and burn. However it will not burn for long, and will extinguish itself. That being said, you could be wondering if vodka can be highly flammable or not.

The truth of the matter is that Vodka at 80 proof is flammable, but not highly flammable. However, vodka that is 100 proof or more can be extremely flammable, and should be handled with care and caution as the flames can burn for much longer.

Whilst vodka is flammable, it will not catch fire just sitting in your drinks cupboard or cabinet. It would have to be near an open flame to catch fire, so just keep the vodka away from any naked flames, and it should not pose a risk to your home.

In any case, most vodkas are typically 80 proof, and not extremely flammable, so it is only really the ones with a very high alcohol content that you need to be wary of.

As long as the vodka is stored neatly away in a sealed bottle, there is little to no risk of your vodka igniting or catching fire and burning in your home.

To summarize, vodka is composed of two ingredients; ethanol and water. Therefore, vodka is flammable, but it is not highly flammable unless it has a very high alcohol level.

As most vodkas are only 80 proof, they will ignite when exposed to a naked flame, and they will burn with a bright, blue flame.

However, this will go out after a few seconds as the ethanol evaporates and is extinguished by the water.