A fire extinguisher plays an important role in the event of a fire. Using the incorrect type of extinguisher can worsen the fire. 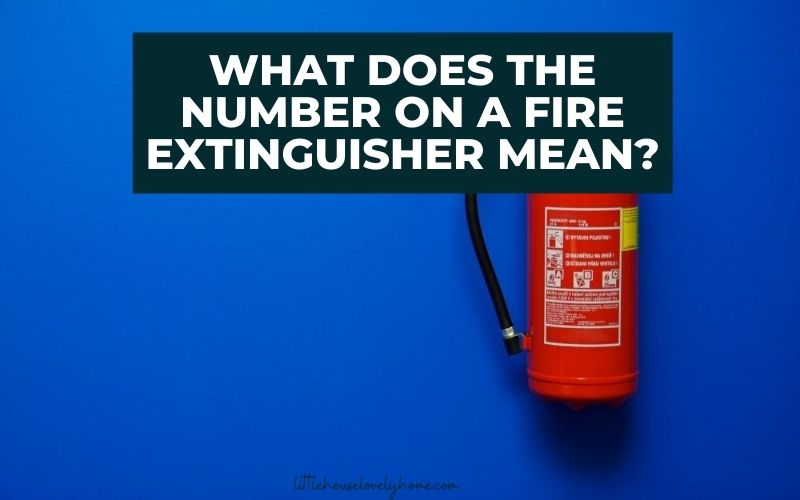 In our guide below, we have explained the meaning behind the numbers and what they signify.

Fire extinguishers are labeled with letters that are used to identify the type of fire that they can be used to tackle.

These include type A, type B, and type C. Type A and type B extinguishers are labeled with an accompanying number.

This number refers to the capacity of the extinguisher and the size of the fire that the agent i.e. the powder or the gas, can put out.

The meaning of this figure differs between type A and type B extinguishers. Type C extinguishers do not have an accompanying number.

When discussing a type A extinguisher the number refers to the extinguisher’s effectiveness in putting out a fire against 1 ¼ gallons of water. Simply put, an extinguisher with a 3A rating, is just as effective as using 3 ¾ of water to tackle a fire.

The numerical figure accompanying a type B extinguisher has a slightly different meaning. It refers to the size of the area that the fire extinguisher can cover. The measurement is taken in square feet. For example, an extinguisher with a 4B rating can tackle a fire that covers an area measuring 4 square feet.

Ultimately, the number gives you an idea of how effective the extinguisher is going to be against the size of the fire that you are confronted with.

Some extinguishers are capable of putting out a range of fires. The rating of these extinguishers is going to be a little more difficult to understand. Essentially, if it is labeled 3A10BC, its capacity equates to the effectiveness of 3 ¼ gallons of water and it can cover an area measuring 10 square feet.

Aside from this, the extinguisher can also be used to put out electrical fires.

As expected, an extinguisher that is labeled with a large number is intended to be used to put out a larger fire.

However, there are some downsides to this. This type of extinguisher is going to be more substantially built and weighty, which in turn may make it more difficult to use.

Moreover, storing a larger extinguisher is going to provide more of a challenge. Remember that you should not try to put out a large fire single-handedly as this can be dangerous.

Related: How To Clean Up Fire Extinguisher Residue

Are there any fire extinguishers that are not labeled with a number?

Now as you may be aware, there are other types of extinguishers besides those which are labeled type A and type B. A type C fire is caused by electrical equipment.

An extinguisher that has the letter C attached to it is designed to tackle fires of this kind, but you will notice that they do not use any numbers.

A type C extinguisher does not contain any agents that can conduct electricity.

You can also get type D and type K extinguishers. Again, the labels of these extinguishers are not accompanied by a number. A type D fire is caused by combustible metals such as magnesium, aluminum, potassium, titanium, and several more.

The letter D alone does not provide a very detailed insight into the effectiveness of the fire extinguisher. Some class D agents are only capable of fighting a fire caused by one type of metal, however, others are effective against several different types of metal.

A type K fire extinguisher is used to put out a fire that has been caused by fats, oil, or grease. Similar to type C and type D fire extinguishers, type K will not have a number on its label. This is because it is difficult to pinpoint the severity of the hazard.

For example, one type of cooking matter that we have listed below may require much more extinguishing than another type.

What do the letters on a fire extinguisher mean?

As we have touched upon previously, an extinguisher is labeled with a number that correlates to the type of fire that it can be used to put out.

A type A fire refers to one that has been caused by combustible materials such as paper, wood, plastic, or rubber. A type B fire is caused by flammable liquids. This may be gas, oil, solvents, or lacquers.

The majority of extinguishers that are intended for home use are labeled as types A, B, or C. In some cases, it may be a combination of them all.

What are the consequences of using the wrong type of fire extinguisher?

The flashes and flames may become more severe and aggressive and as a result, you are at an increased risk of becoming injured. Closely linked to this, the severity of the flames may cause the fire to spread to another area.

Another consequence of using the incorrect fire extinguisher is electrical shock or even a potential explosion.

Make sure that you know what type of extinguisher you need, rather than purchasing any one of the different types.

As you can see, both the numbers and letters on a fire extinguisher make it much easier to identify the different classifications. These ratings tell you what type of fire the extinguisher can be used to put out.

Different types will behave differently and this will become evident in how they respond to the flames. Choose an extinguisher with a number rating that is compatible with the size of the fire.