In an ideal world, you could flush anything you wanted down the toilet and it would magically disappear. You may be wondering, can you flush condoms without causing major damage to your septic system?

You should never flush condoms down the toilet. No matter what type of toilet you’re using, this could lead to clogs or other issues in the plumbing system. Proper condom disposal involves throwing it away in the trash.

Read on to learn about why a used condom can cause damage to your home as well as the environment. 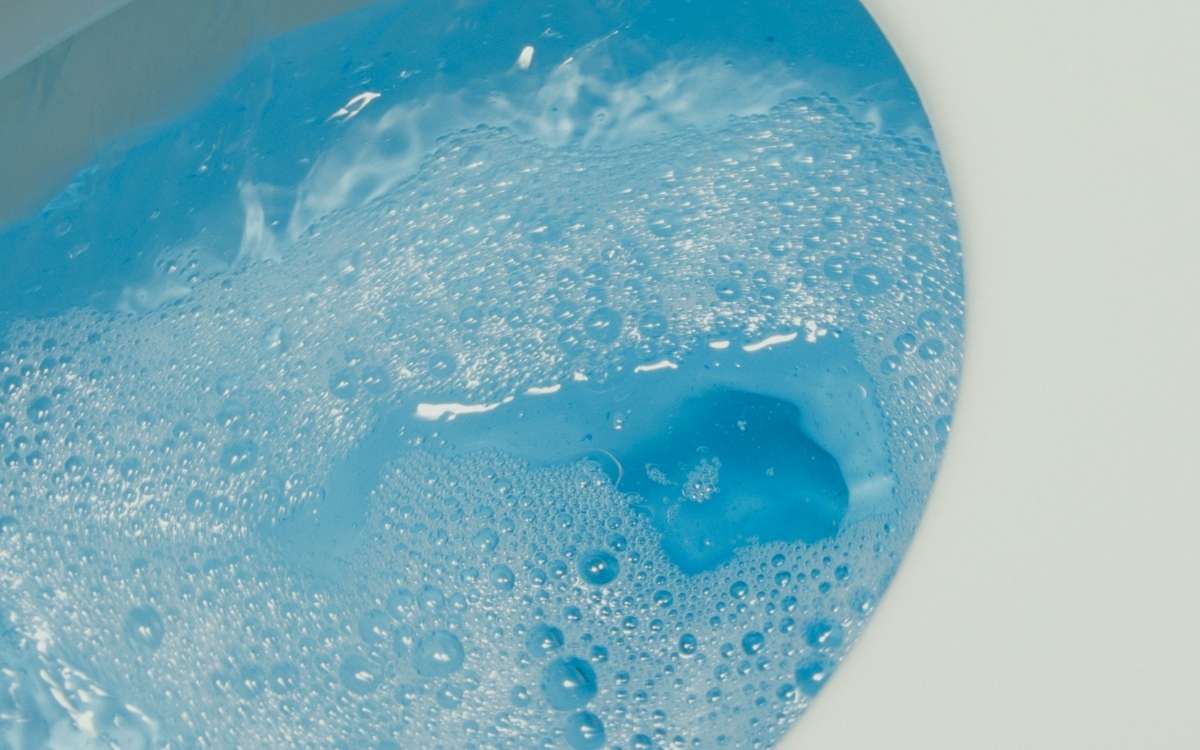 Can I Flush Latex Condoms?

Even though it may seem like a discreet solution, it’s not a good idea to flush a latex condom down the toilet.

The problem will get worse if you’ve been flushing condoms down the toilet on a regular basis.

Here are some issues you may run into if you flush condoms instead of throwing them in the trash can:

1. You May Clog Your Plumbing

Used condoms are non-biodegradable and may get caught in your plumbing system or septic tank. Latex doesn’t break down in the same way that human feces or toilet paper does.

These used condoms will pile up in your plumbing and over time could cause a very pricy mess.

They will eventually create a “fatberg” which is a pile of congealed garbage and waste that gets lodged in the sewage system.

This substance needs to be removed manually, which can be an inconvenient and unpleasant process. You’ll likely need a plumber to assist you with this process. 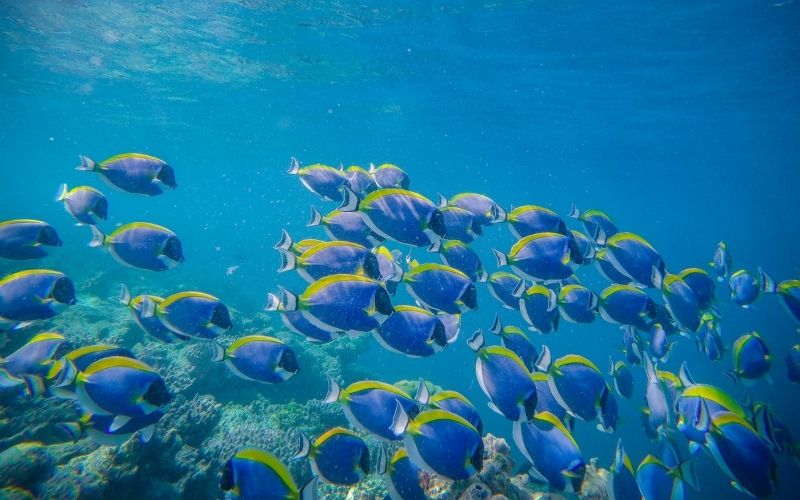 Biodegradable condoms are made from earth-friendly materials, sheep caecum. However, these are a minority and most people use traditional polyurethane and latex condoms.

These are types of synthetic rubber that take a very long time to break down.

Over 450 million polyurethane and latex condoms are sold in the US alone each year, and this has a tremendous impact on the oceans.

These items move from your plumbing system into the sewer system into open bodies of water.

They pollute aquatic environments and create microplastics that make it into the bodies of plants, animals, and humans alike.

These microplastics can cause a host of health problems, so it’s important that we do our part to reduce the amount of plastic that ends up in our waterways.

This also eventually brings used condoms into public water supplies where they can cause problems with the filtration system.

You may even see them popping up at public beaches, which is not only gross but also dangerous for swimmers.

3. It May Eventually Come Up If There’s a Clog

If you have been flushing condoms down the toilet for quite some time, and perhaps even a few other objects here and there, you may have a clog brewing within your sewer systems.

You may not notice it because everything you flush goes down without an issue.

But this could be a catastrophic situation any day. Suddenly, you may experience issues with your toilet flushing or water draining.

If you have a clog, it will eventually come up and be noticeable – whether it’s in your sink, shower, or toilet. Be sure to avoid this by not flushing things that don’t belong.

How Should I Dispose of a Used Condom?

The best way to dispose of a condom is by tossing it in the trash.

Don’t leave it on the ground, put it in the garbage disposal, flush it, bury it, recycle it, or leave it in an area where pets, children, or other individuals can access it.

Here are a couple of considerations to make when disposing of used condoms properly:

When removing a male condom, point the tip downward. A condom can come off inside-out if you pull it off by the ring.

2. Tie Off the Condom 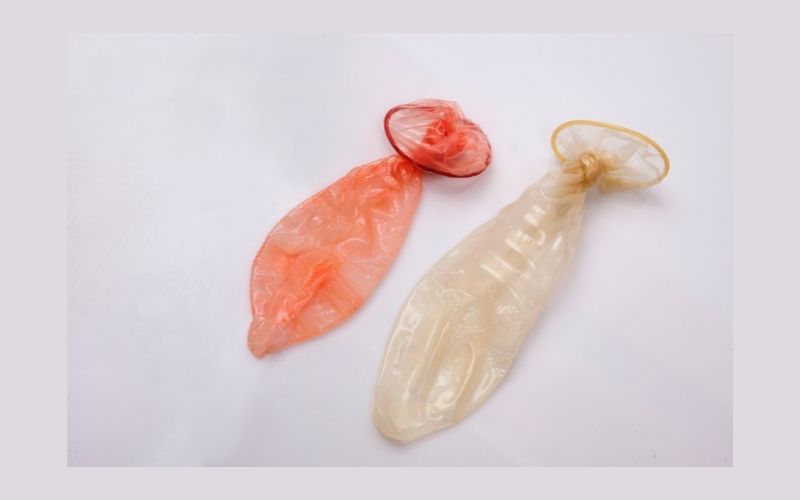 Similar to how you would with a balloon, create a small tight knot in the middle of the condom. This will help to reduce a mess such as a spill or any odors.

Do this delicately so as to not puncture the latex or spill.

3. Wrap the Condom in Toilet Paper 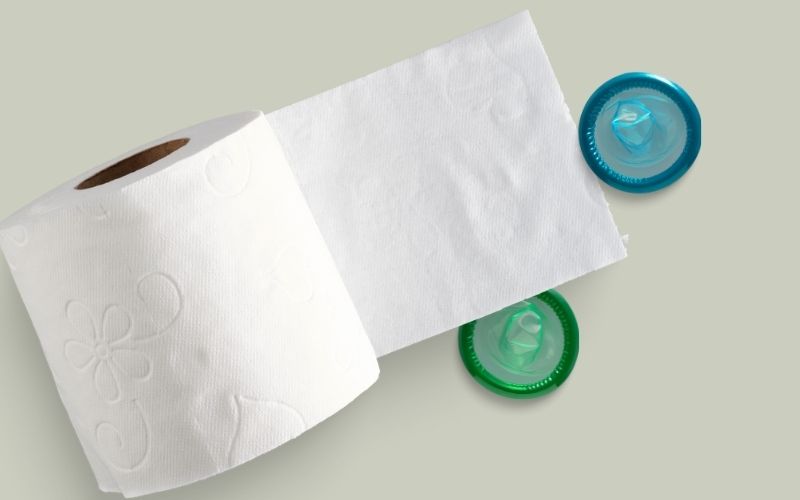 After the condom is knotted, use toilet paper to wrap around it. This will further help with containing any messes or odors. It will also help if you want to be discreet about your used condoms.

4. Put the Condom in a Trash Bin

After you have taken these steps, you can now place the condom in a trash bin. If there isn’t one close by, carry it with you until you find an appropriate place to dispose of it.

Do not put condoms in recycling bins as they are made of latex which is not recyclable.

Will a Condom Come Back Up in the Toilet?

In general, a used condom won’t surface again after being flushed. Most condoms will pass through the house and will either discharge into the sewer system or gather in the septic tank.

Even though one condom will stay flushed, if you’re experiencing clogged toilets in your house, it’s possible that they can float back into the toilet.

This can be dangerous for children or pets in the home and is also unsanitary. Use your toilet properly and safely dispose of your used condom in the trash.

How To Unclog a Toilet When Flushing Condoms

If you have an unfortunate day and experience a clogged toilet, there are a few things you can use to help dislodge flushed condoms: 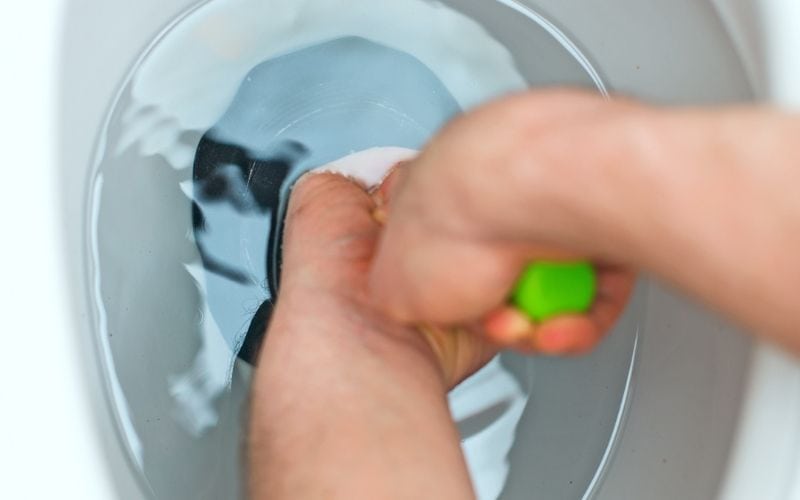 The first thing you can try is to plunge the toilet bowl. This will help if the clog is close to the surface.

Take the plunger and place it over the hole at the bottom of the toilet bowl. Push and pull the plunger up and down vigorously.

Be sure to do this quickly so that the plunger doesn’t lose its suction. After a few minutes, try flushing your toilet to see if the clog has been removed.

If plunging doesn’t work, the next thing you can try is using a plumbing snake. A plumbing snake is a long, flexible coil that you insert into the toilet bowl to reach the clog.

You want to insert the plumbing snake into the hole at the bottom of the toilet bowl and then push it through until you feel resistance.

Once you feel resistance, start turning the handle of the plumbing snake. As you turn the handle, the coil will start to break up the clog.

After a few minutes, the clog may be removed. Flush the toilet to gauge your progress.

Use a Wire Coat Hanger

If you don’t have any specialized tools, you can try using a wire coat hanger. First, straighten out the coat hanger and then make a small hook at one end.

Give the toilet a flush after a few minutes to see if you’ve cleared the congealed lump. 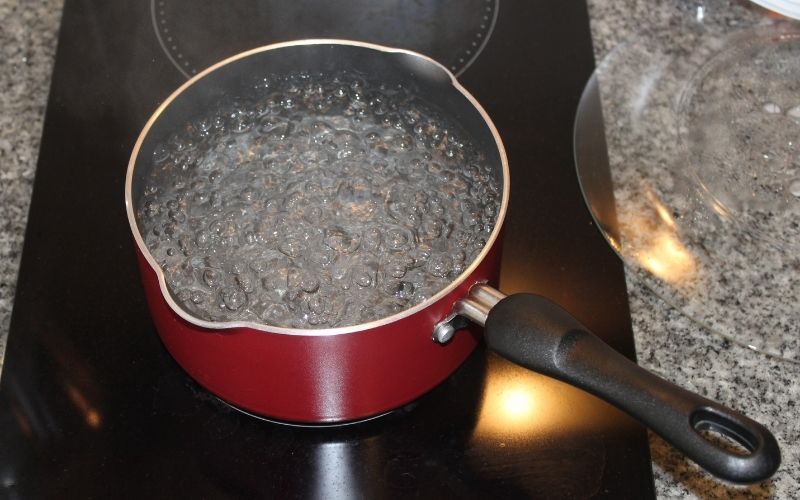 Another option is to try using boiling water. Boiling water can help break up the clog so that it’s easier to remove, especially if it’s caused by grease and oil.

Fill a cooking pot with water and place it on the stove. Turn the stove on to high and wait for the water to come to a boil.

Once the water is boiling, carefully pour it into the toilet bowl. Be sure to pour the water slowly so that it doesn’t splash up and burn you.

Let the water sit in the toilet bowl for a few minutes before flushing. The boiling water should help break up the clog.

If you’ve tried all of the above and you’re still dealing with a clogged toilet, you may need to use caustic soda. Caustic soda, also known as lye, is a corrosive substance that can help break up the clog.

Wear gloves and eye protection when handling caustic soda. Pour one cup of caustic soda into the toilet bowl and let it sit for 15 minutes.

After 15 minutes, flush the toilet to see if the clog has been removed. If the clog is still present, you may need to repeat this process. 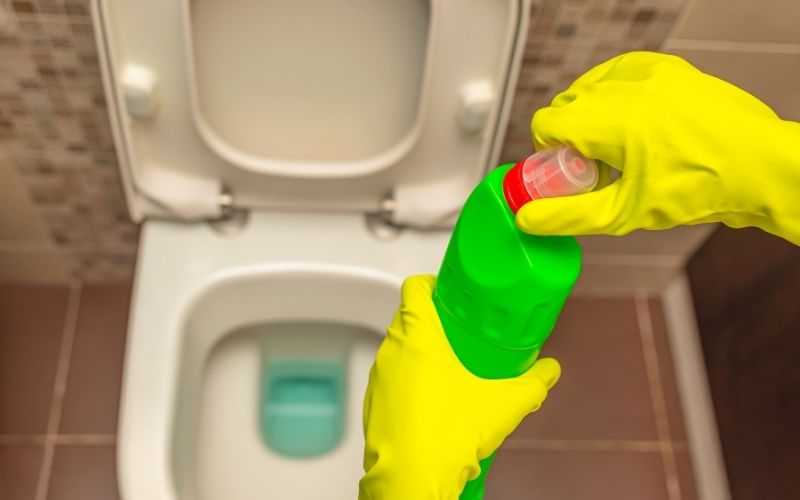 If you’ve tried everything and the clog is still present, you can try using a commercial drain cleaner.

Commercial drain cleaners are chemicals that can help break up the clog.

If you’ve tried everything and the clog is still present, it may be time to call a plumber.

A plumbing professional will be able to quickly assess the situation and take care of the problem. They can also give you advice on how to prevent clogs in the future.

What Can I Flush Down the Toilet?

The things you can flush down the toilet make a surprisingly shortlist. Stick to only flushing the following items in your washroom:

When you go #1 and #2, this is alright to flush. The amount of water in your toilet bowl is enough to carry these waste products down the drain.

If you or someone in your family is sick, you may need to flush vomit down the toilet. Vomit can be difficult to clean up, so flushing it is the best option.

If you’ve ever been out in public and had to use a restroom that didn’t have any toilet paper, you know how important this product is. Fortunately, it’s also safe to flush.

As long as they are biodegradable, baby wipes are safe to flush. However, it’s best to use them sparingly as they can contribute to clogs.

The moral of the story is to never flush condoms down the toilet- no matter how tempting it may be.

Be sure to properly dispose of them in the trash can to avoid any costly or environmentally damaging consequences. 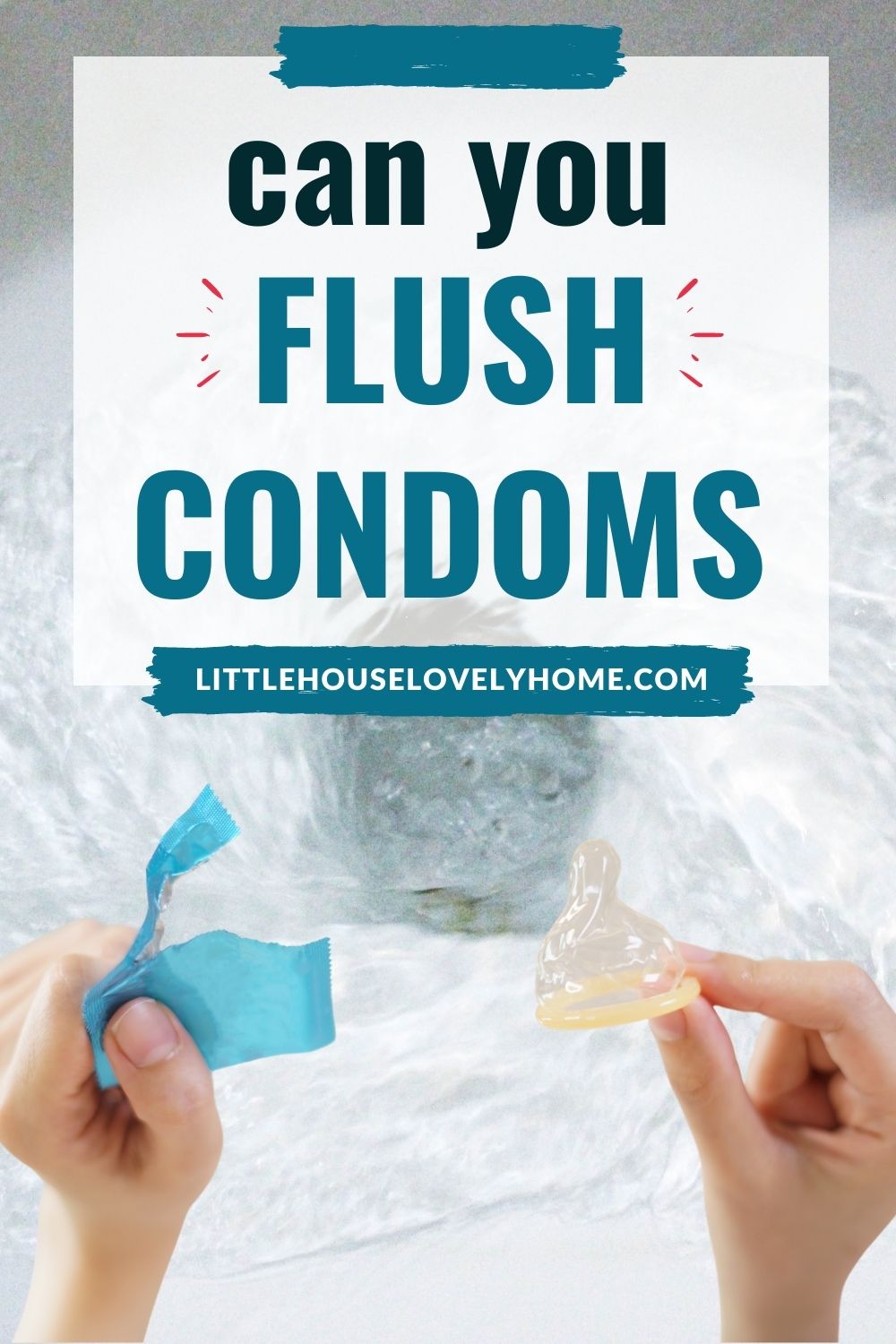 Welcome! I'm Emma. Together with my husband and two boys, I downsized my home to an 860 sqft 2 bed, 1 bathroom home. Join me as I turn my little house into a lovely family home.