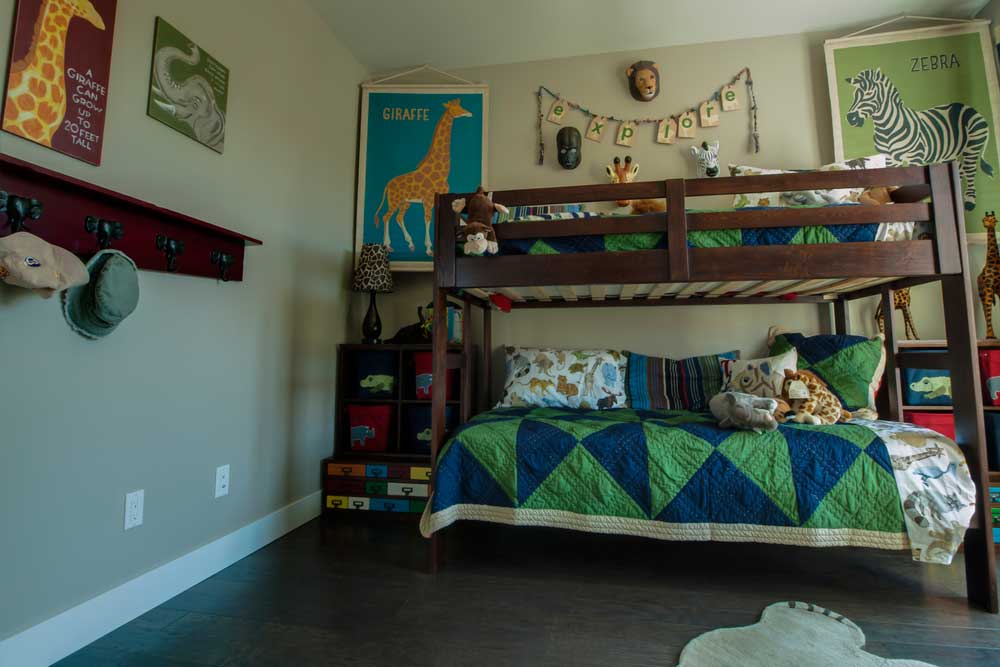 Before I became a mom, I never pictured my kids sharing a room. I never shared a room, even though my parents weren’t wealthy or even middle class. My brother and I had a room each. Sharing a room was done only by kids in big families.

It’s the whole reason we bought the big house, all the bedrooms.

And, if I’m honest it’s the thing I’ve struggled with the most when I think about living long term in this wee house with my family.

My boys have a 3.5 year age difference. They annoy each other. They bicker and pinch and kick and scream at each other (regularly). They also cuddle and wrestle and play and laugh at jokes they won’t share with me.

My husband and I figured the best solution was to force a smaller bedroom into the existing floor plan of our house. Adding an extension is an expensive exercise we would rather avoid.

Putting a non-structural wall between the kitchen and existing dining space seemed like it would work.

It would create a tiny room – not big enough to be considered a bedroom here in New Zealand (minimum 6sqm), but suitable for kids under 10 years old.

This means both kids would have small rooms to themselves, with the only big room to be used by the grownups.

Neither small room was (or would be) wide enough for a double bed, let alone a queen.

We have ummed and ahhed over this for months. And now, we’ve changed our minds (this is what happens when you renovate a house you live in – so much changing of minds).

The existing 2nd bedroom is an oblong (measuring 1.9m * 3.9m or approx 6ft by 13ft), long enough to fit bunks beds with the door open. There is no option for us to even take the smaller room and give the kids the big room, as the small room is too narrow to fit a double bed not shoved in against a wall.

It’s also the outermost room of the house, receiving the bulk of the wind and rain in winter which makes it the coldest room.

It’s a perfect study, or sunroom. Ideal bedroom it is not. It also runs off our current living room so it can be noisy.

The current large bedroom is 4.5m by 2.9m (approx 15ft by 10ft). Large enough to fit bunks and storage and have some play space on the floor.

We’ve got a large living room which we plan to turn into the master bedroom. We’ll use the existing 2nd bedroom as a study.

We’ll then knock down our obsolete internal brick chimney, freeing up space in the kitchen /diner to make more room for a combined kitchen, living, dining room. This will lead outside with french doors and decking – which won’t happen right away, we need to SAVE the money first – so perhaps next summer.

It’ll be small. The current dining area is 10ft by 8ft. Removing the chimney will give us a wee bit more space.

But we’ll need an L-shaped couch with storage,  wall-mounted shelving and a wall-mounted TV. A minimalist living room for people who just can’t part with their TV #sorrynotsorry.

When summer comes and we can afford decking we’ll put a canopy over the top so it’ll be like an outdoor room, making the tiny living room feel larger, even if it isn’t.

The plus is the toy corner will now move to the kids’ room, and the bookshelf from the living room will go into my office – MY OFFICE!

The kids’ will have the bunks, and play space and each other.  The room has only recently been renovated and soundproofed (it’s the common wall with our neighbor) so it won’t need anything done – other than new blackout/soundproof curtains.

I’m so happy we’ve settled on a plan to make our small house work for us, and hopefully increase the value of it by increasing its’s function. We have a meeting with our builder later in the week. I’ll let you know how we get on.